The Football season is finally upon us. The long wait is over. I find it strange that Halloween decorations go on sale earlier and earlier, but football seems to take longer and longer to arrive each year. Obviously this weekend was the start of the 2013 NFL season. And despite all the fanfare and hoopla I couldn’t help but think about it as a very slow death march. I take no pleasure in saying this, as I enjoy the Pro Game as much as anyone. Anyone that has a grasp of reality that is, thankfully I cannot compete with the emotional involvement of self proclaimed die hard fans. However the problem has seemed obvious for the past few seasons, and there really is no remedy for the game as we have grown to love it.

We all know the old joke about the NFL standing for “Not For Long”. Well as I watched this weekend’s games the grim truth of that acronym became more and more apparent. The NFL is slowly dying, that is quite obvious. What isn’t so obvious is that it is a case of assisted suicide. What do I mean? The NFL is paying big bucks to put itself (as we know it) out of business.

The Strength & Conditioning Industry is KILLING THE NFL

Now that seems on its face to be a shocking and controversial statement. The reality is that it should come as no surprise to anyone. What is the job of any Strength & Conditioning Coach? Their job is to make their players Bigger, Stronger, Faster. You know what the great news is? Our industry constantly produces those results. Just look at the NFL combine. Every year the 40 times decrease and the Bench For Reps numbers increase. That is simply a fact. And while it is a great testament to the Strength & Conditioning industry, it also means that it is killing NFL Football as we know it. 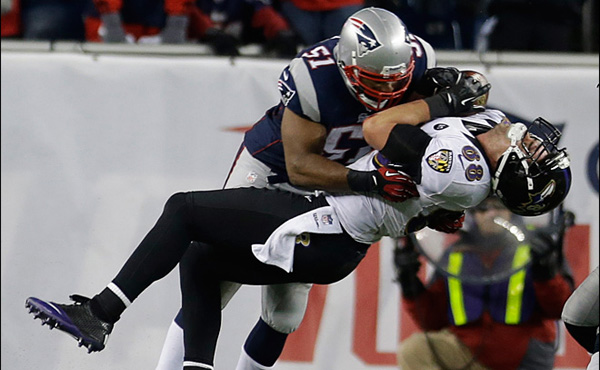 If you think about it for a second it is inevitable. Roger Goodell has gone to great lengths to make the game safer. He has systematically “softened” the game (according to fans) to reduce the number of high impact collisions that occur. Why has he done this? Quite simply because no amount of padding can stop a human being’s brain from crashing into their skull in a high impact situation. And as I just mentioned the impacts are getting more and more violent. It’s a simple matter of FORCE.

Now we all know this formula, or we should. The amount of force generated is directly related to mass of an object and it’s rate of acceleration. So what does a physics lesson have to do with your Sunday afternoon entertainment? Well, again you have to stop and think for a second. Let’s rewrite the equation as it pertains to your beloved football.

We know for a fact that coaches like Joe Defranco, Eric Cressey, Jason Ferruggia, and Elliott Hulse are making athletes bigger, stronger, faster. We all know this. So the right side of the equation is increasing every year. And since the left side is equal to the right side, then the force of impact is becoming greater every season as well. Those “ooooh….ahhhhh” moments that we see each weekend, are becoming more and more violent. And while we laughingly refer to NFL players as Gladiators (let me know when they are attacked by a lion) we ignore the science behind it because all we want is to be entertained.

“Are you NOT Entertained?!” -Maximus Decimus Meridius

As just a fun little aside, just think about this the next time that you complain about an NFL player that leaves YOUR team for more money elsewhere.  If you LOVE the Big Hits, and who could blame you, then just admit that you do not at all care about the well being of your favorite player.  Just be that honest, and don’t expect a hometown discount when contract negotiations come up.  Because you know for a fact that you won’t care about your favorite players quality of life after he reaches 35.

Bigger, stronger, and faster is the name of the game for college and professional football. And now, according to a new study in the Journal of Strength and Conditioning Research, there’s data to back up what we’ve been seeing players morph into on the field over the past 70 years.

Researchers at Grand Valley State University did an analysis of the average height, weight, and body fat percentage of college and professional football players from 1942 to 2011. While players at all positions gained weight over time and increased body fat, one of the most striking statistics was that college interior linemen gained about 1 to 2 pounds per year over 60 years, and professional players gained up to 1.5 pounds per year over 7 decades.  Read More

No matter how many rules exist to protect the “unprotected player” those big hits that we love will continue to happen. The current incarnation of the sport lends itself to people hitting each other at the highest speed possible. The fans bloodlust makes it even worse, because players just want to make that BIG HIT. They know that is the way to get onto the ESPN Highlight Reel. So much so that they don’t even know how to tackle anymore. That is a subject for a different day. The simple fact, as I said at the beginning, is that there is no way to cushion your brain inside your head. Scientists have equated an NFL tackle to being a car crash victim. And thanks to Strength and Conditioning Coaches doing a kick ass job, those cars are just getting bigger and faster. 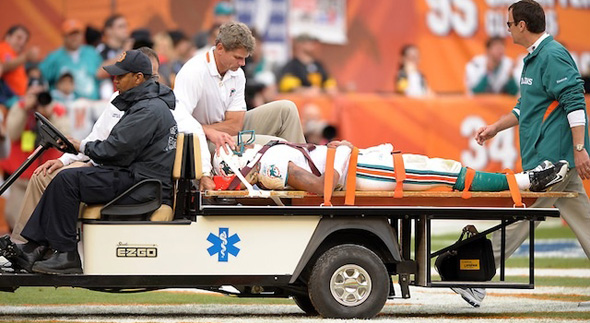 CAN YOU TELL THE DIFFERENCE BETWEEN AN NFL PLAYER AND A CAR CRASH VICTIM?

Answer: Car Crash
These injuries were caused when a 56-year-old man made a left turn onto a five-lane roadway in his SUV and got T-boned by a Ford Focus traveling at 53 MPH. Both vehicles spiraled out of control, and both drivers were sent to the hospital.

Answer: Willis McGahee, NFL Player
McGahee was one of the top college running back prospects in 2003, but that changed when he suffered a knee-destroying hit from Ohio State safety Will Allen during the Fiesta Bowl. It took reconstructive surgery to repair McGahee’s leg, it delayed his career, and he was never the same afterwards—arguably, that’s worse than most car accidents.

Answer: Car Crash
These injuries occurred when a female driver of a Mercedes convertible sideswiped another car before colliding headfirst into a concrete traffic barrier. The driver was not wearing a seatbelt, and sustained most of the injuries when she flew forward into the airbag.

Answer: Kevin Everett, NFL Player
The Buffalo Bills tight end suffered a career-ending spinal cord injury in 2007 after to a brutal helmet-to-helmet collision with Domenik Hixon during a kickoff. The tackle sent Everett to the ground as if he had been shot, and doctors feared he might never walk again. Five years later, the former player is up and moving, but that doesn’t make the hit any less scary. Don’t play football, kids, and be careful out there on the roads.

So what is the solution? Unfortunately, short of bioengineering padding for your brain I don’t know that there is one. Adding more padding to the outside of your head does nothing for the violent change of direction your brain encounters when a player gets hit full speed. Unless you remove tackling from the game, or reduce the amount of padding so that players have to risk their own body to hit another player then the NFL as we know it will eventually kill itself off.

At the end of the day you only have two choices. You can either accept the fact that the NFL is going to be forced to evolve into an entirely different animal to survive, or you can ignore it and act surprised when it happens anyway. Truth be told there is a third option. You could start preparing for the end of your NFL world by investing your passion elsewhere. We both know you aren’t going to do that though. That would make you one of those doomsday preppers, or even worse some wacko that doesn’t think that football is life or death. My only advice is to enjoy it while you can. And if you see a Strength and Conditioning coach be sure to thank them for killing the only thing you loved in your life.

The Problem with Dogma