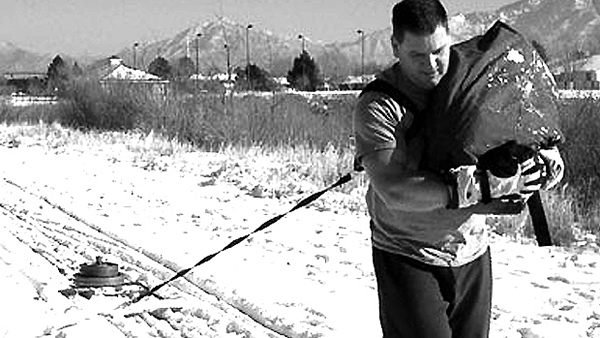 Coach Dan John is often heard quoting John Jerome  by saying that “specificity comes at a price.”  What he is speaking of is the accumulation of injuries over the course of an athletic career, using the same muscles repetitively.  This can lead to pattern overload, and muscular imbalances, but produces a more efficient athlete at his chosen task.  Whether that price is worth it depends on the individual’s idea of success.

If you want an example of specificity, look no further than the 100m sprint specialist.  He trains his body to be the most efficient machine at the task of running 100m in a straight line.  At the elite level this means that the sprinter will start to decelerate at the 101m mark.  Now it is true that some sprinters cross over and run both the 100m and the 200m in the same competition, but there is no way to avoid the fact that their performance at one of those two distances will be compromised. By choosing his feature distance the sprinter is limiting his range of performance, but in a way that allows him to perform optimally.  To put it another way he is setting a limit to what he can do to increase his performance in that task.

How does this apply to strength training?  Every time you step into a gym your goal should be to improve.  The question is, what do you need to improve?  Some people chose to only train their strength and ignore their weakness.  However, much like “you can’t out train a shitty diet”…”you can’t out train your weak points”.  Eventually they will have to be addressed, if not progress will cease, or you will be injured.

The success of Jim Wendler’s 5/3/1 Training Program is well documented, as is Jim’s obsession with midgets. In a recent article he gave us “The Simplest Training Template”.  In it he suggested that training should focus on three main areas; Stretch, Lift, Sprint.  The beauty of this idea is indeed its simplicity.  Wendler offers sage advice, “When everything becomes important, nothing gets done correctly. So pick an area you need to work on, figure out what you need to do, and make the necessary cuts to the other two areas”.  He really is like a life-sized Buddha, covered with hair…and tatts.

Training really is a battle not only with gravity, but with your body.  You want change and improvement, your body wants efficiency and homeostasis.  For every weak point you address another is created.  You must constantly keep adapting, while staying focused on why you are training in the first place.  We have all seen those people in the gym that do the same thing year after year and make little to no progress.  I often wonder why they bother to “workout”.  It’s similar to getting in your car, without a destination in mind and just driving.  It can be fun, but in the end you are just burning gas, and time.  Both of which, in this day and age are precious resources.

In training you have to clearly determine your main goal and work towards it.  Make a conscience choice of where you want to go, and decide how to get there.  Having said that, you must realize that the closer you get to your goal the further away you will be from something else.  More focus on training, means less focus on your personal life or other areas.  Is your goal worth the sacrifice?  Is your goal worth what it will cost you?  Only you can decide that.

For me personally, even training towards what some might consider a foolish goal, is preferential to “working out” without a purpose.