I have been writing a lot lately about the judgmental aspects of the fitness industry.  It is no surprise when an industry is somewhat based on the aesthetic that there are many differing opinions.  Obviously in the fitness industry we have a bit of skewed view about muscular women.  I know for myself there is nothing more beautiful than a strong, athletic woman.  It is nothing necessarily new about it, but there is a very disturbing trend that I have noticed.

Whenever a female athlete, crossfitter, strongwoman competitor, mma fighter, or bodybuilder posts a pic or video the reaction from the general public is fascinating.  They tend to miss the point of whatever was posted and it quickly devolves into a “would you want to sleep with her” discussion.

First of all, what does that have to do with anything?  In the information age, where no one can actually take the time to think do people miss the point of everything and just look for excuses to share their unsolicited opinions?  When a woman decides to enter into one of these sports do you think it is to meet guys?  Doubtful, in fact they probably have a decent idea of the judgment they will face.  In fact most of them face judgment from within their own family for doing something that isn’t “normal”.  And yet these women are strong enough to choose to pursue it anyway because it is their passion.

Some of the thought provoking comments…..

beatriz256 – ‘this is like a monster club!, they are not attractive at all! today women want to become man, how sad is that. ‘

And of course my two cents….

Don Johnson – “Damn people are ridiculous. You click on a Youtube video titled “Female Bodybuilders” just to bitch about stuff. Seriously do you think any of these women CARE if you think they are “Hot”. This isn’t a beauty pageant….or Match.com…it is a BodyBuilding Competition. If you don’t like it, don’t watch it. Go click on some tiny little bikini competitors video. They probably don’t care if you think they are hot or not either.”

Obviously you can see if you scroll through the comments that my opinion, like it usually is, was in the minority.  This is how these women rewarded for their efforts?  They are mocked and ridiculed by people who are insecure about themselves.  Seriously when someone says a female bodybuilder looks manly, what is their motivation?  Is it just to make themselves feel better about their own mediocrity.  Or is that what people these days do.  They are too lazy to do something awesome themselves so they look for opportunities to shit on other people doing awesome things. 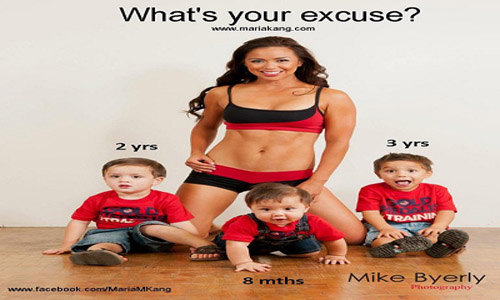 I actually saw this story about a Maria King (Mother of 3) that posted this pic after she got back into shape from her 3rd pregnancy.  I know my perception is somewhat skewed, but I don’t even consider her an example of an extremely muscular woman.  This is just a mother that decided she didn’t want to use motherhood as an excuse for being out of shape and did something about it.   The reaction was amazing to me.

The majority of people, man and woman alike responded negatively to this.  Coming up with all kinds of excuses why they can’t achieve what she did.  Some suggested that she must have had a personal trainer and a nanny.  Others even suggested that she was a horrible mother for being more worried about her appearance than her children.  Obviously none of them bothered to go over to her site where she explained everything she did, and proved that none of that was the case.  Read her Actual Store Here.  She did this to MOTIVATE people, and look at what she got in return.

Samantha Lawson -“If she did give birth to those kids, I bet ur ass she got like a private trainer and 4 nannies to take care of her children while she works out all day and isn’t being a mother to those kids! How do u think actresses bounce back so quickly from pregnancy?? Not because they are the ones raising their kids! I would have a body like that too if I chose to give up raising my own children to a nanny…”

Heather Trammell – “Everyone else’s comments are “I have 4 kids and I work out…” yeah, and I bet you don’t have a job like everyone else. People don’t understand the stress of having to WORK and raise kids AND working out AND taking care of your household business…. I agree with you, there is no way a normal person could look like this after three kids….“

Richard Ford – 1st off there isn’t a damn thing wrong with a women having love handles , she looks so wrapped up into herself she probably only had them kids so she could further promote herself , they probable don’t get any real time with her… just look at that picture , the way she is dressed , she is selling it and put her kids in a sex sales advertisement , all about herself. Just wrong IMO.” 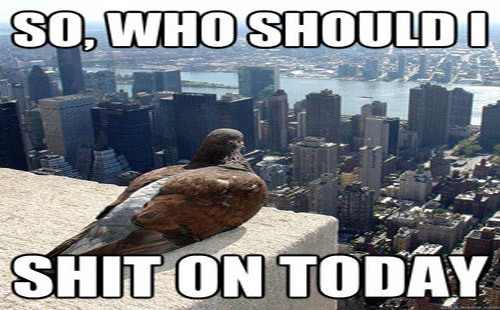 I honestly think this has become America’s favorite pastime.  And it may be a case of the people that want to complain about stuff being the loudest.  It’s just that so many people choose to shit on others rather than trying to improve themselves.  Why?  I have never understand what purposes that serves.  I mean I am sure it is an attempt to make themselves feel better, but it is nothing short of pathetic.  If something isn’t your particular cup ‘o tea, it doesn’t make it wrong.  Trust me there are plenty of female bodybuilders that make money off their look from people that do find them attractive.  Seriously if you main goal in life is to be “Normal” then you lack vision and I feel sorry for you.  These women have chosen their own path, and followed their passion.  They should be respected for that alone.  Who cares if you want to date them or not?!  I can assure you they don’t.